Breast cancer (mammary carcinoma) is a malignant tissue change in the breast. With 69,900 new cases each year, breast cancer is the most common cancer in women in Germany.1 If it is detected early, the chances of recovery are good. Here you can find out which symptoms you can use to recognize breast cancer and what treatment options are available.

The female breast consists mainly of fat and glandular tissue and is traversed by numerous blood and lymphatic vessels. Hormonal fluctuations e.g. B. during menstruation or pregnancy change their tissue. The breast reacts very sensitively and is different for every woman. Tumor diseases of the breast are just as individual and diverse. In recent decades, it has been possible to research the various types of breast cancer more closely and, in the process, to gain important new insights. The more precisely the tumor type can be described, the more individualized the therapy can be.

How common is breast cancer?

About one in eight women will develop breast cancer in their lifetime . The risk of the disease increases above all from the age of 40 . 1 Because the more often a cell divides, the higher the risk that an error will occur during division and cells will degenerate. Men can also get breast cancer: According to the Robert Koch Institute, around 720 men were affected in 2018 .

The now established systematic breast cancer screening temporarily contributed to the increase in the number of women diagnosed in these regions in Europe and North America. It has now been established that fewer women in the 50 to 69 age group develop advanced tumors than before the introduction of systematic breast examinations. Early detection helps ensure that breast cancer is more often detected at a stage where there is a chance of a cure. 1

Today we also know that “mammary carcinoma” is an umbrella term for many different types of the disease: breast cancer is not just breast cancer. Each tumor has specific characteristics that play an important role in further treatment.

Among the features that breast cancer cells can carry on their surface are various binding sites called receptors. Endogenous substances can “dock” here, such as hormones or growth factors. Three receptor types have already been very well researched : the two hormone receptors for the sex hormones estrogen and progesterone and HER2 (human epidermal growth factor receptor type 2).

These three receptors are routinely determined as biomarkers in breast cancer due to the availability of therapies targeting them . If the breast cancer cells have the hormone receptors, the tumor grows in a hormone-dependent manner and anti-hormone therapy can stop tumor growth. If HER2 receptors are on the cancer cells, HER2-targeted antibody therapy can fight the tumor. If these three receptors are missing, anti-hormone therapy and HER2-directed antibody therapy, for example, are ineffective. These tumors are termed HER2 negative, hormone receptor negative, or triple negative (TNBC). 2 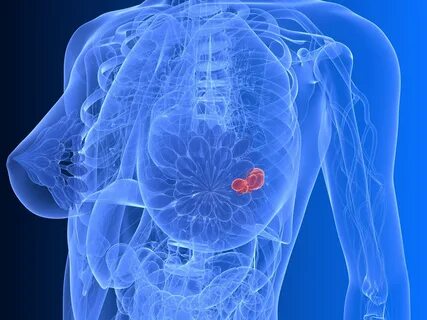 Factors such as diet and lifestyle influence the risk of developing the disease. These include smoking, increased alcohol consumption (>20 mg/day), a body mass index over 35 , especially after menopause, and lack of exercise . Hormones can also play a role. A hormonal replacement therapy against menopausal symptoms, but also the “pill”, change the estrogen and progestin balance of the body and temporarily increase the risk of breast cancer. 3 But there are also other factors that favor breast cancer.

About five to ten percent of all affected women have a genetic mutation that makes them more susceptible to breast cancer. Women with a mutation in the BRCA-1 or BRCA-2 gene have a 56 percent risk of developing breast cancer. 4 A family history of breast cancer can indicate an increased risk.

Researchers have recently identified other risk genes in addition to the BRCA-1 or BRCA-2 genes, including ATM (ataxia telangiectasia mutated), CHEK2 (checkpoint kinase 2) and PALB2 (partner and localizer of BRCA2). Scientists have now shown in a large-scale study that such gene mutations can also influence tumor properties and increase the risk of breast cancer. 5

Differences in tumor characteristics may have implications for treatment , particularly in the context of targeted therapies.
The study also clarifies which genes play a subordinate role in breast cancer. This will make it possible to provide women and men from disadvantaged families with more detailed information and advice on genetic risks in the future. 5

Especially in the early stages, breast cancer often causes no symptoms. It is all the more important that you regularly and carefully examine your breasts yourself. You can find out how here.

70 percent of women with breast cancer say they have felt a lump themselves. With a little practice you can already feel small knots of a few millimeters. But other changes can also indicate breast cancer and should better be clarified by a doctor .

9 CHANGES THAT ARE BETTER SEEN BY A DOCTOR⁶