Definition of disease. Causes of the disease

Pancreatic cancer is a malignant tumor that develops from altered pancreatic cells.

Pancreatic cancer is the sixth most common malignancy in terms of occurrence. Since 1987, the incidence of pancreatic cancer in our country has increased by 30%, the incidence among women is 7.6, among men – 9.5 per 100 thousand people. Experts note that the prevalence of the disease worldwide will increase. According to forecasts, the number of patients with pancreatic cancer in 2020 compared to the past twenty years will be 32% higher in developed countries, and 83% higher in developing countries, reaching 168,453 and 162,401 cases, respectively.  In 75% of cases, the disease affects the head of the pancreas.

Anatomy and physiology of the pancreas: 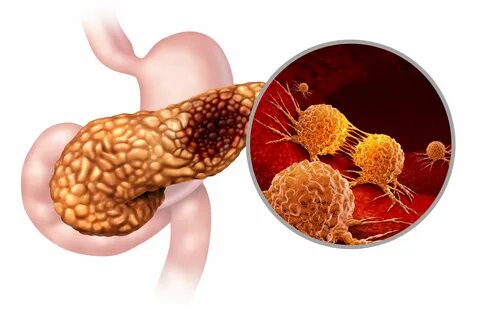 The main risk factors for developing pancreatic cancer are:

Often, in the initial stages, the signs of pancreatic cancer are not expressed, and subjective sensations allow suspecting its presence.

The first symptoms of pancreatic cancer may include:

The first symptoms of pancreatic cancer also include loss of appetite and fatigue.

As the disease progresses, other symptoms of pancreatic cancer may appear:

However, all these symptoms of pancreatic cancer are non-specific, and when they appear, a complex of diagnostic procedures is necessary.

Classification and stages of development of pancreatic cancer

Depending on the location of the tumor: 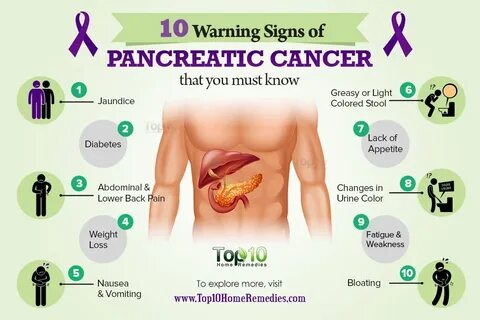 Also allocate a total lesion of the pancreas.

Depending on the histological form of the disease (determined by the results of histological examination of the tumor): 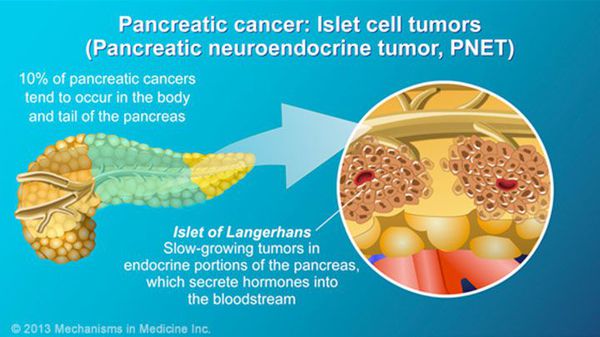 Description of the development of oncology according to the TNM system:

Pancreatic cancer with metastases to other organs: 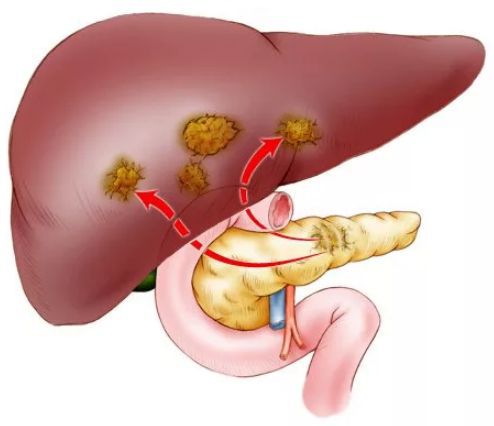 Metastases in the pancreas

Approximately 2% of pancreatic cancer cases are metastases from other organs. The most common primary foci of cancer, leading to the appearance of metastases in the pancreas:

If the formation is located in the body or tail of the pancreas, then the development of complications often occurs at the 4th stage of the disease, and they are primarily associated with cancer intoxication.

When the tumor is located in the head of the pancreas, the following complications may develop:

Manifestations: yellowing of the whites of the eyes, skin, darkening of urine, stool becomes light. The first sign of developing obstructive jaundice may be itchy skin. The development of this complication is associated with the germination of the tumor in the ducts, which ensure the delivery of bile from the liver to the duodenum. Most often, before proceeding with radical surgical treatment, it is necessary to stop the signs of jaundice (the most acceptable technique is minimally invasive drainage of the bile ducts under ultrasound scanning).

Manifestations: nausea, vomiting, feeling of heaviness and fullness of the stomach. This complication develops due to the fact that the tumor from the head of the pancreas spreads into the duodenum, as a result of which the intestinal lumen is blocked, and food cannot exit the stomach into the underlying sections of the small intestine.

It is manifested by dark-colored vomiting (“coffee grounds”) or the appearance of black stools. This is due to the collapse of the tumor, and, as a result, the occurrence of bleeding.

Pancreatic cancer increases blood clotting, which can lead to venous and arterial thromboembolism [9] .

Of practical importance are the determinations of oncological markers of blood serum: CA 19.9 and CEA (cancer-embryonic antigen), an increase in which may indirectly indicate the presence of a cancerous tumor in a patient. Unfortunately, these tests are not specific, and the rates can be increased in other diseases, such as colon cancer, stomach cancer, etc.

Instead of computed tomography, magnetic resonance imaging is possible, but the use of intravenous contrast is a prerequisite.

There are more expensive diagnostic techniques, for example, positron emission tomography, but its implementation as the first research method is impractical due to the high cost.

Needle biopsy of the tumor

If necessary, the doctor may recommend performing a needle biopsy of the tumor. This may be necessary to determine the histological type of the tumor and select an individual treatment.

Treatment of pancreatic cancer involves the use of surgical and chemotherapy methods.

Features of treatment at different stages

When surgery is needed for pancreatic cancer depends on the histological form of the disease and its stage.

With neuroendocrine tumors of the pancreas, surgical treatment is possible at any stage of the disease, with further courses of chemotherapy. The volume of surgery for these tumors is determined individually and depends on the prevalence of the disease and the experience of the operating team.

In other histological forms of pancreatic cancer, the tactics are identical to those of treatment for adenocarcinoma.

Total pancreatectomy. With a total lesion of the pancreas, the only possible surgical intervention is the complete removal of the pancreas. Recently, due to the availability of good replacement therapy (insulin therapy and correction of enzymatic deficiency), this operation is advisable only in some cases.

All operations on the pancreas are associated with a large number of complications. The only factor that can reliably reduce the incidence of complications is the experience of the surgeon performing this surgical treatment. It has been proven that when performing more than 20 gastropancreatoduodenal resections per year, the death rate is less than 2%, but if 5-15 such operations are performed, the mortality rate is 15-20%.

At stage III of the disease, the absence of the effect of chemotherapeutic treatment and the impossibility of surgical intervention, stereotactic radiation therapy is indicated.

Stereotactic radiation therapy (SLT) is a modern method of radiotherapy, in which high doses of ionizing radiation are delivered to the target area in a small number of fractions. 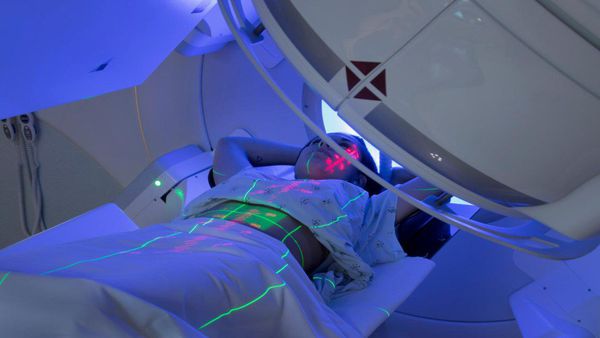 Treatment of malignant tumors of the pancreas with liver metastases

With neuroendocrine tumors of the pancreas, surgical treatment can be performed even in the presence of metastatic foci. In other histological forms of pancreatic cancer with liver metastases, only chemotherapy is indicated.

Taking painkillers for pancreatic cancer is necessary only when pain occurs. First, the patient is prescribed non-narcotic analgesics, if they are ineffective – narcotic drugs.

There is no specific diet for pancreatic cancer. The diet must be observed after pancreatic surgery (Table No. 5A or Table No. 9 if the patient has diabetes).

The prognosis for pancreatic head cancer depends on the histological form of the disease:

Relapses within a year after surgery occur in 50–60% of cases with pancreatic adenocarcinoma and in 14% with neuroendocrine tumors .

Can pancreatic cancer be prevented

Prevention of the disease is the maintenance of a healthy lifestyle: quitting smoking as a risk factor, the exclusion of alcohol, which is the main factor in the occurrence of chronic pancreatitis. Maintaining an active lifestyle and proper nutrition reduce the risk of developing diabetes and thus the risk of pancreatic cancer.